Graceful, intelligent and huge, Whales cast a spell over the human species. But their thoughts and ways of life lie beyond our understanding, in an alien habitat.

A few people who’ve dived and made their acquaintance come closer to penetrating the unknowable, biologists for example. However whales and scientists aren’t given to sharing their knowledge and feelings.

Wade Hughes is a writer from W.A., an artist with the camera, who specialises in communicating, and with his wife Robyn has spent decades looking for whales. Their photos, mostly black and white, taken underwater and above, illustrate whales being themselves in the moods and phases of life: uncontrived and revealing views in their natural realm, with text evoking the insights each close encounter produces.

WADE HUGHES, a Fellow of the Royal Geographical Society, and a Member of the Explorers Club, New York. He took up underwater photography in the 1960s. After working as a wool classer and photojournalist, and a corporate career in Australia, the USA and the Middle East, he now devotes his time to conservation photography and writing. He has repeatedly been an Australian Geographic Nature Photographer of the Year finalist, winning the 2016 award for the year’s best animal portrait. In 2017 Britain’s Natural History Museum selected his humpback whale entry in the year’s Best 100 photographs. ROBYN HUGHES, who began diving in the 1980s, is an accomplished wildlife and documentary photographer, who has travelled in almost 60 countries. They live on the WA coast, south of Perth.

* Endorsed by Australian Geographic, rare photos from art exhibition.
* One of a kind whale book with never before seen images of the magical creatures.
* Phtography from one of Australias most renouned nature photographer.
* It is illegal to photograph whales in their natural habitat without a permit. All photographs in the book, have been taken with the correct permits and with the upmost respect for the animals. 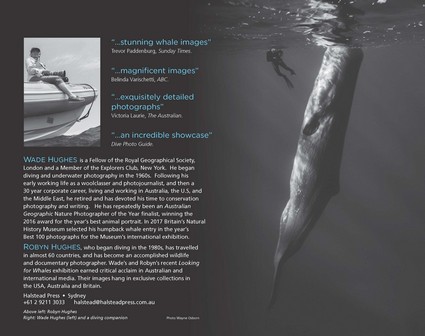